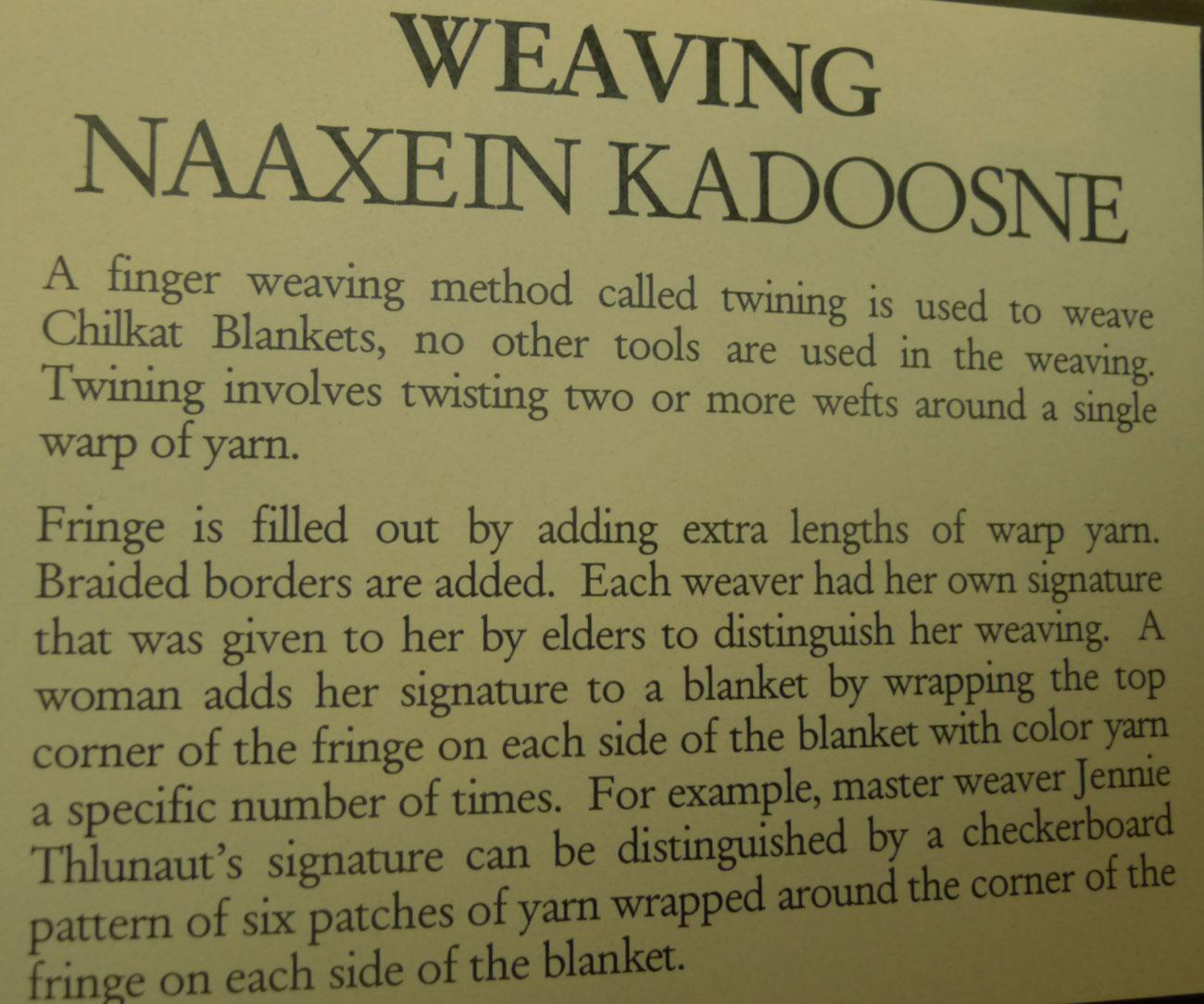 “Naaxein” is the Tlingit word for Chilkat weaving

In addition to the comment in the above photo made about Jennie Thlunaut’s signature, Jennie’s checkerboard “signature” was a pattern of yellow and blue. 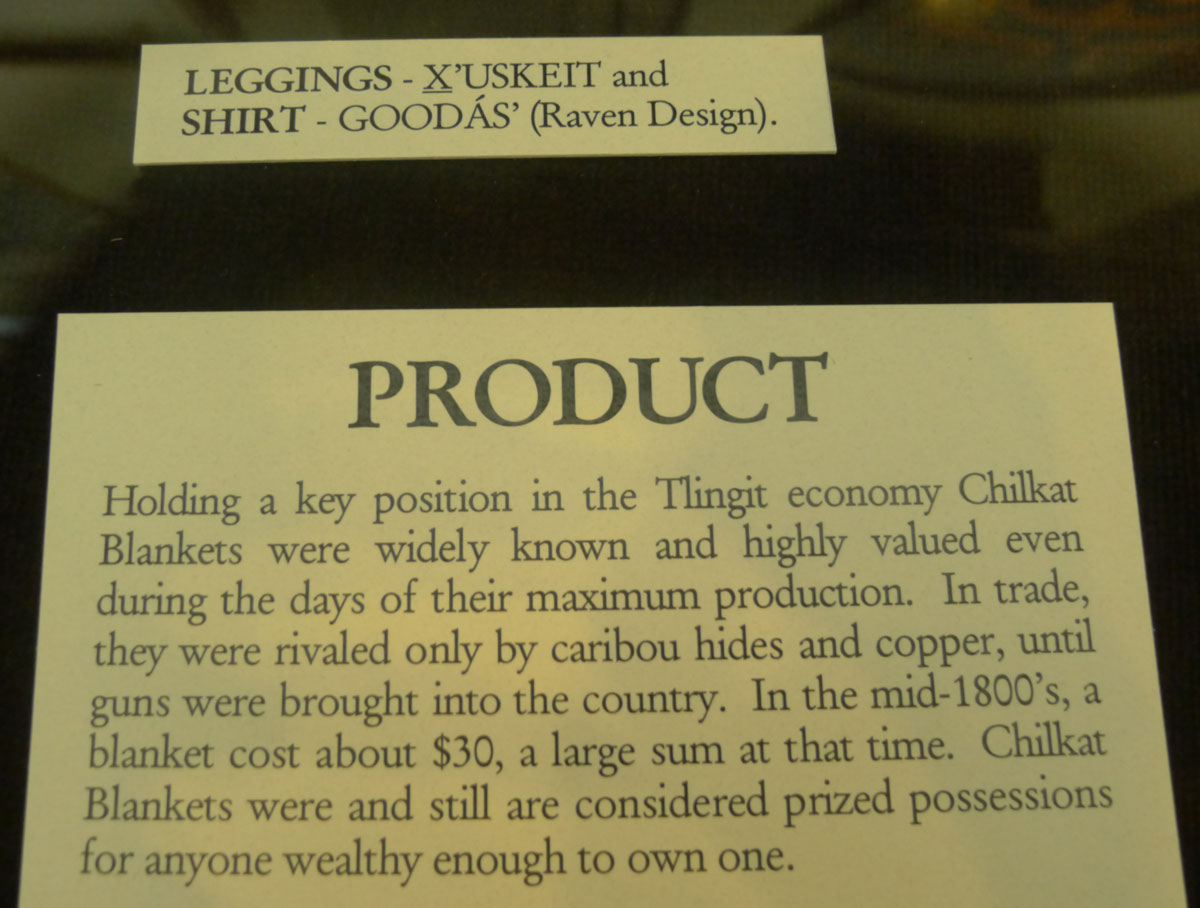 Jennie had told me that she sold her first robe for $50.  If my memory serves me, it was the robe started by her mother who passed away when she was a young teenager.  She thought $50 was pretty good for a Chilkat robe; she had a confident smile on her face as she spoke. 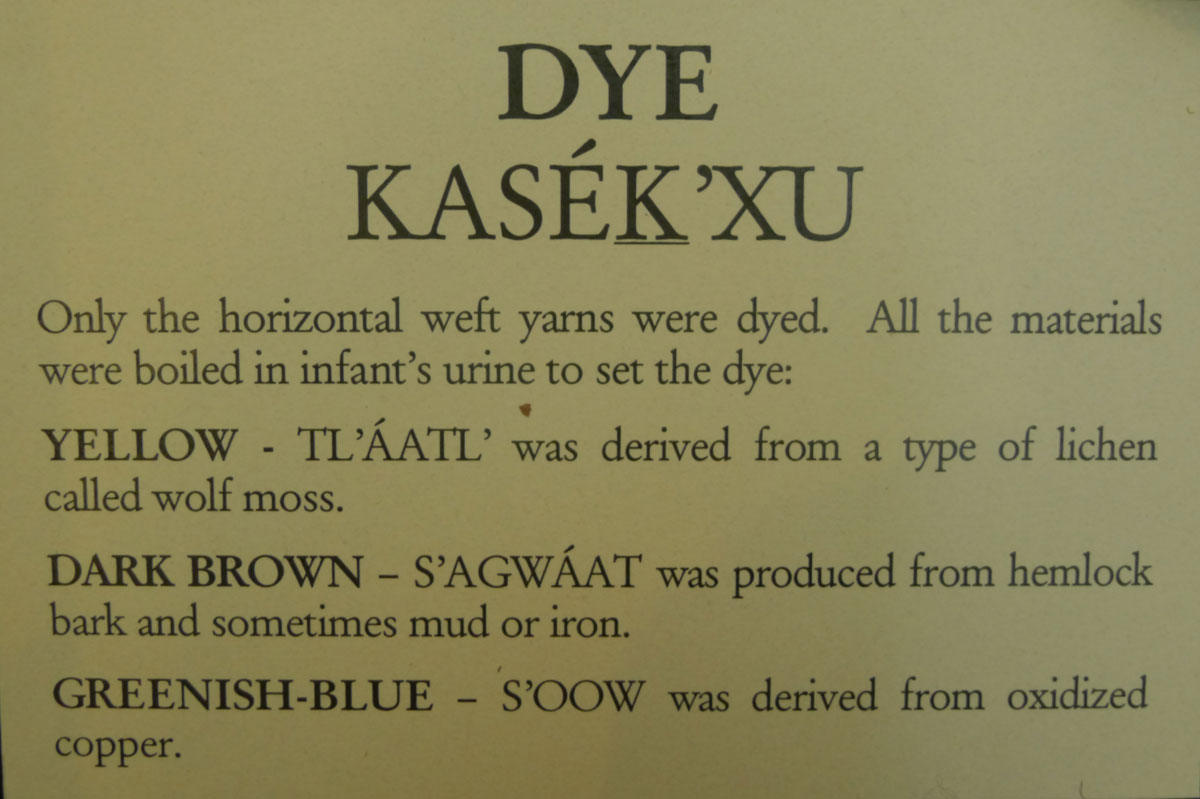 Jennie and Agnes Bellinger (Jennie’s daughter) told me the golden yellow was what weavers strived for and the best way to do this was all in the urine.   The best urine to make the golden yellow was urine from a woman in her last month of pregnancy; second best urine was from a newborn infant.  The way they collected the urine from a newborn was to place the “wolf moss” in the diaper and only collect #1 (as opposed to #2) and put the soaked wolf moss in the dye bath.  The older the baby, or child’s urine, the more pale the golden yellow.  Jennie and Agnes said there is no wolf moss in Southeast Alaska.  The moss was a trade item with the tribes on the other side of the coastal mountains in British Columbia, Canada.  The youth of the urine made the biggest difference in the color achieved and the set of the dye. 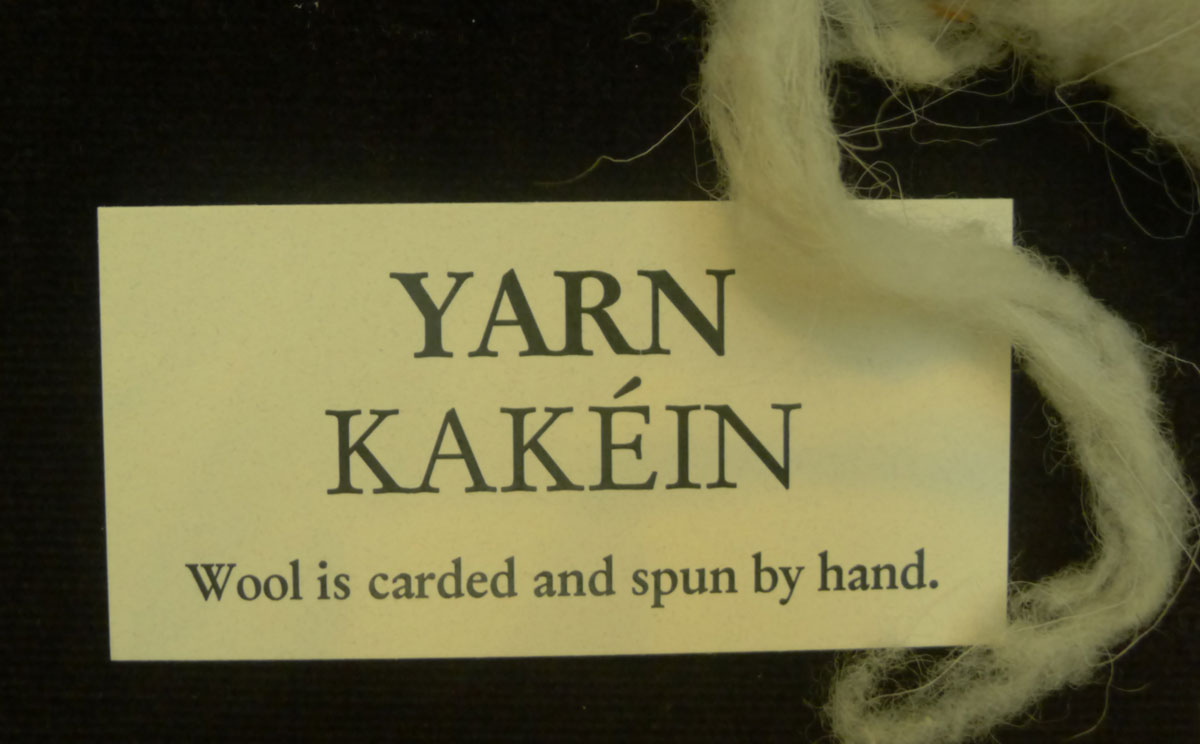 “Kakein” is Tlingit word for yarn

The mountain goat wool and cedar bark spin together as if they were mated for life; they are attracted to one another like bee to a flower!  Mountain goat hides are hard to come by; and even if they were easy to acquire, there are so many Chilkat and Ravenstail weavers on board, we would make the herds run away further up into the high barren mountains!  In the bio on Jennie Thlunaut here on my website under “Tributes,” there is a map showing the places where the men would hunt for mountain goat.  Today there are a couple of guys who hunt mountain goat.  We weavers need to do trades with these guys so we can let go of using the 2nd best wool that has replaced the mountain goat:  merino wool from New Zealand.  This wool is the closest fiber in the world next to the mountain goat.  It spins up okay, but not as fine as the bee and flower of cedar bark and mountain goat wool…! 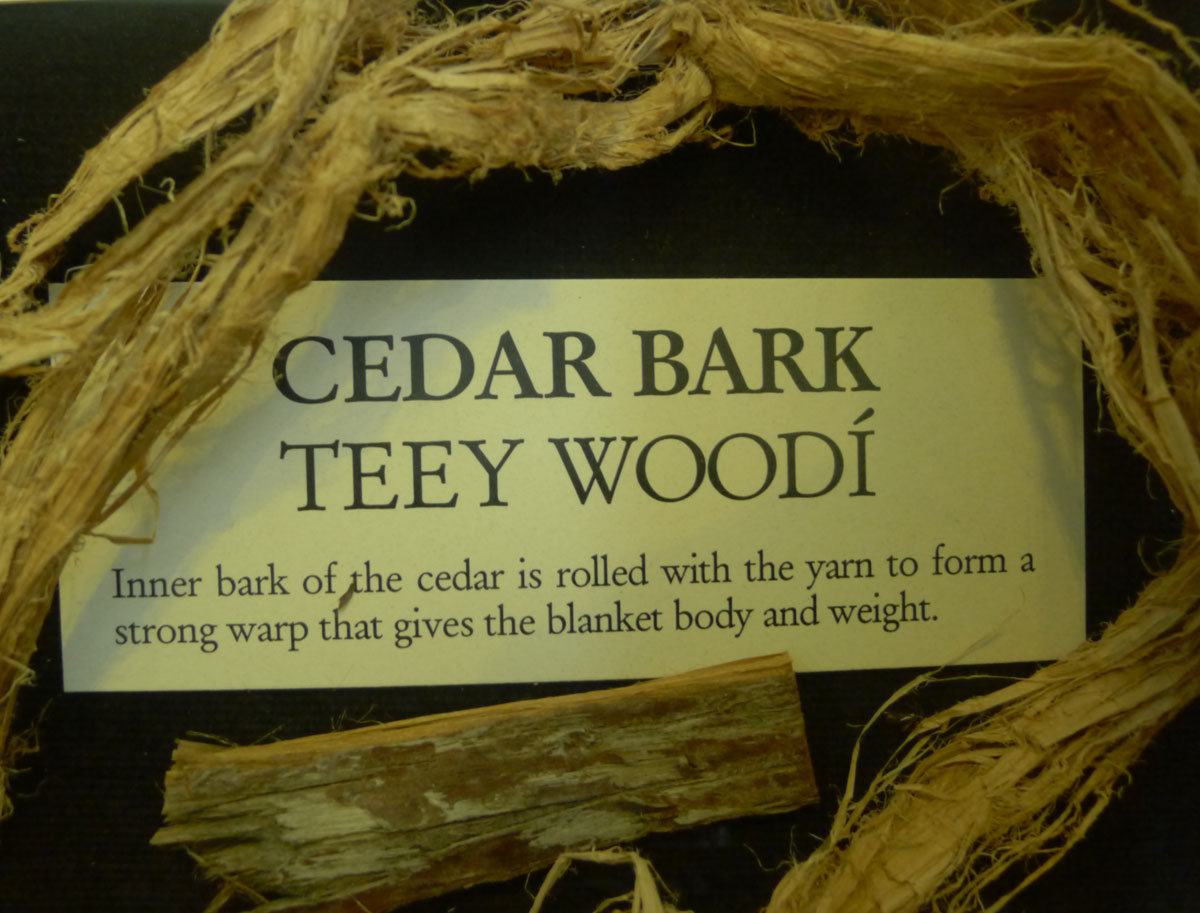 The Western yellow cedar is best o split because the strands are silky smooth (when wet), they pull out into longer strands than the cedar (which is more brittle), and when you spin the bark and wool (done on the thigh), your hands are not prone to the first layer of skin rubbing off!  Though if red cedar is all there is to collect, or someone gifted me some, then it is only sensible to not look the gift horse in the mouth.  You acquire what you can!  It is best to harvest the red cedar when the first sign of spring shows up with new green growth at the tips of the cedar tree boughs. 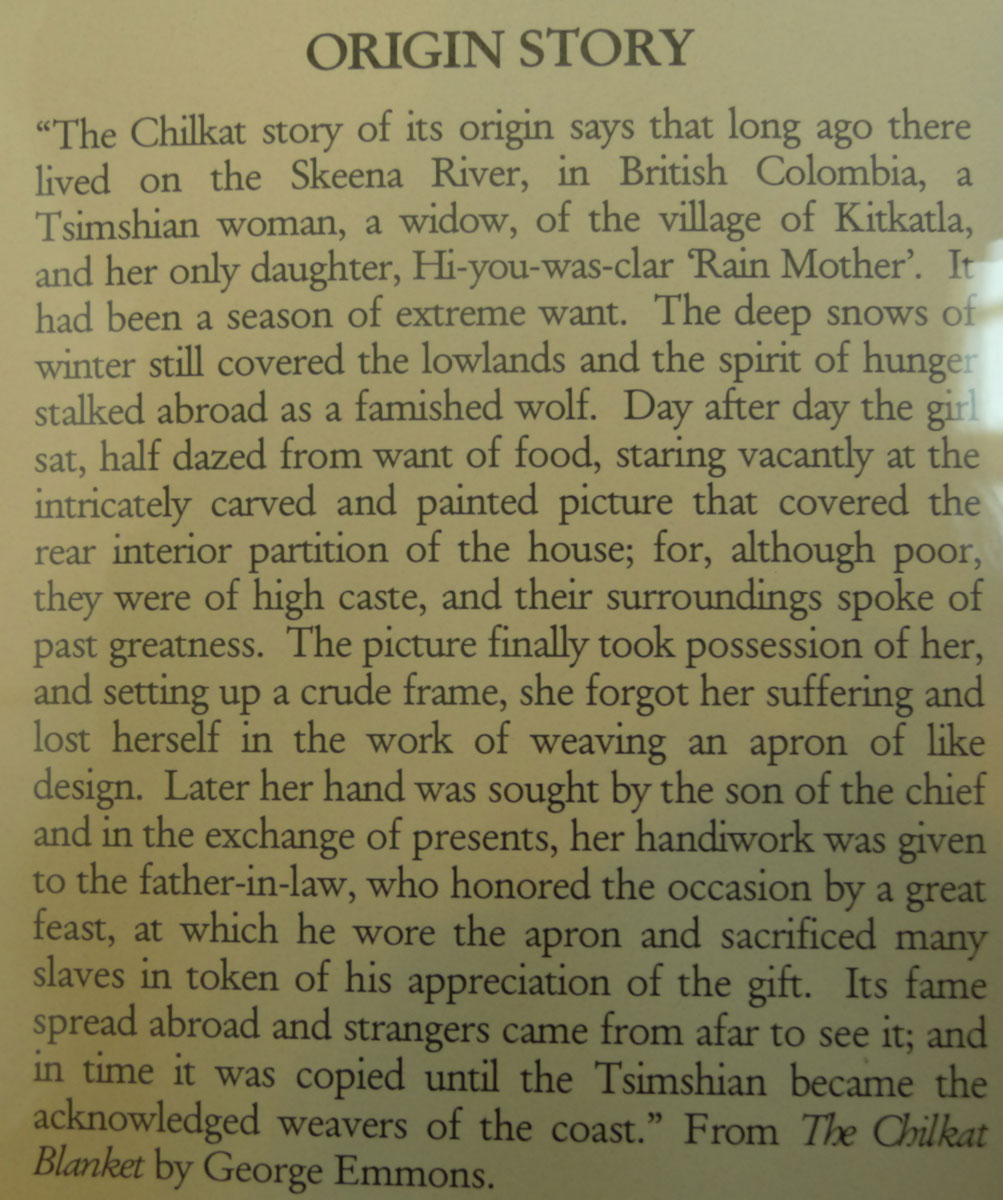 There are several stories of the origin of where Chilkat weaving first began and how it came to and was retained in the Chilkat River Valley in Haines/Klukwan, Alaska.  The Nishga’a in the Nass River area claim the weaving originated in the Nass River and only the Nishga’a inhabitated the area, not the Tsimpshian.  The Tsimpshian from the Skeena River say Chilkat weaving originated there.  The weaving had died out because of western contact in both areas, but fortunately, as one of the stories go, a Chilkat chief married a weaver from the Nass River (or Skeena River?), and then another story says it was the other way around.  No matter what the story, all agree that there were specifically 4 sisters of a Raven Clan in Klukwan who unraveled the Chilkat apron to gain the knowledge of how the weaving was done. 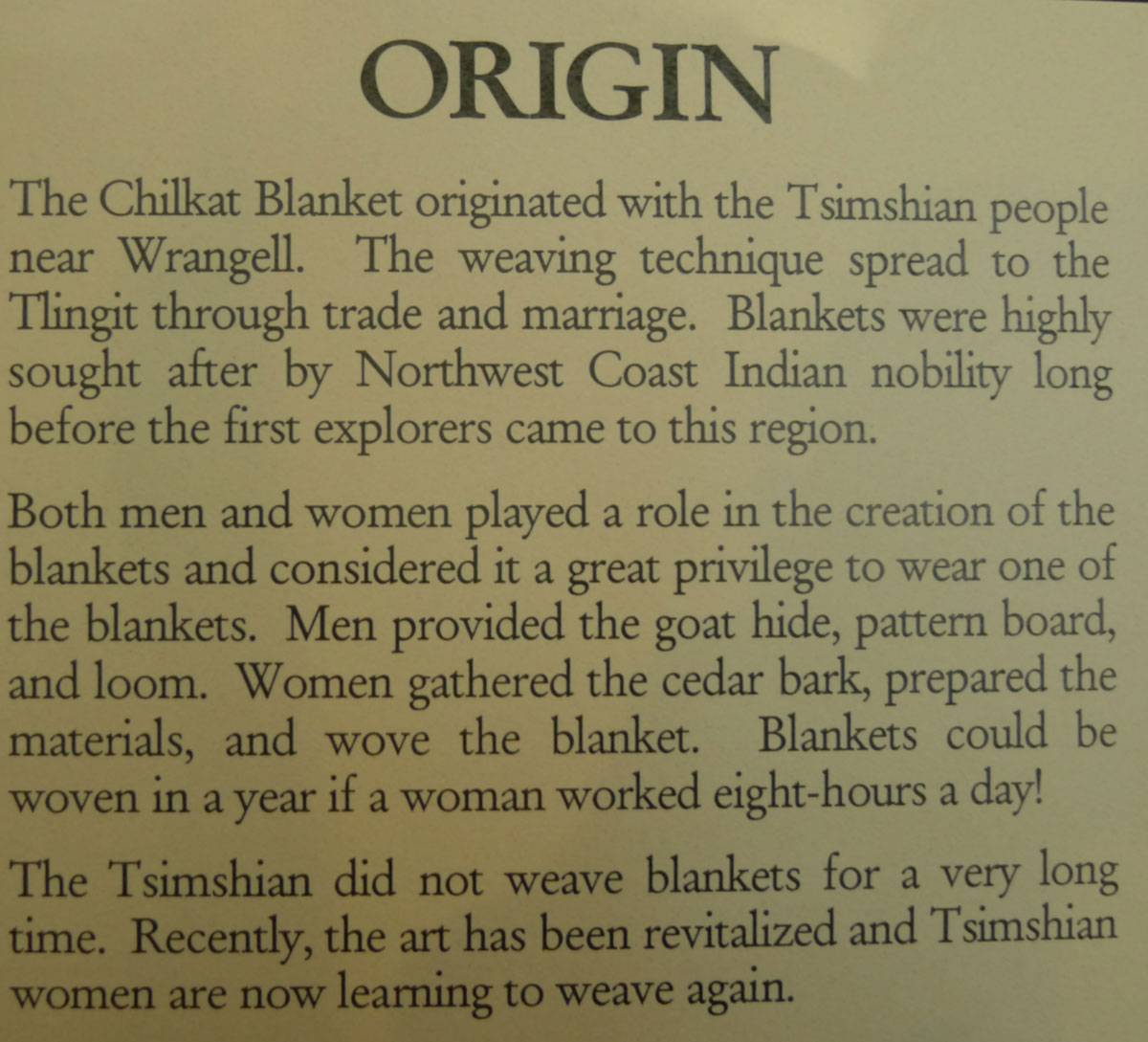 Traditionally men designed the Chilkat robes because they were the artists of form line; women were the weavers…